This morning my son woke up early to play his game on my phone. I gave him my phone and thought he was playing it. When the second alarm went off and I went to tell him that it was time to start getting ready for school he was really upset, because he had immediately fallen back asleep with my phone in his hand – lol! He was sad, but I guess that he just needed the extra sleep this morning… So we just got up and got ready for school. Once I dropped him off, I came home and had something to eat. Then I unloaded and loaded the dishwasher. Then I repotted a plant that I’ve been meaning to get to and tidied up a few others, by getting rid of dead leaves, etc. I did some other things around the house. Then I went upstairs around 1:00 and rested until about 3:15. I didn’t really sleep, I just kind of relaxed. When I got up I got ready to drive my daughter, then I got some food together for her, so that she had supper with her at dance. Then we left and drove to dance. We actually made pretty good time and we were only 5 minutes late. We thought that we were going to be later, considering we left at 3:45 and her class begins at 4:00!! We had to drive from Beaumont to 50th Street and Sherwood Park Freeway! At my son’s school a child pulled the fire-alarm just before the final bell! So they all had to shuffle outside and be accounted for before they could go home. Also, they were not allowed back into the school. So his backpack with his lunch box and his winter boots are still at the school. He had his jacket, snow pants, toque and gloves on with his indoor runners!! Oh well. Not a huge deal… I’m not one of those parents who freaks out about every little thing! Although I’m certain that the school had to deal with some of those kinds of parents…😂 Anyway, I took the Anthony Henday to Sherwood Park Freeway and made excellent time this afternoon! Also, as we were driving and I was literally just saying, “are you going to text your friend (I actually said her name) and tell her you’re going to be late?!” My daughter received a group text from her teacher saying, “Had the car getting looked at, going to be 5 minutes late!!” And we pulled into the lot and she hadn’t yet arrived!! So my daughter was happy 😊 After dropping her off, I pulled over in the parking lot to read a text from my mom. We texted back and forth for a while. Then I drove back to town. I went to No Frills to pick up more cheap windshield washer fluid, but they were out of stock and the shipment that they were supposed to get in hadn’t arrived yet ☹️ I buy if there because it’s only $3.00. It’s the cheapest I’ve found it. Well, actually, I believe it may be the same at Costco. Except that you have to buy a 4 or 6 pack at Costco, which really isn’t a big deal for me, the way I’ve been running through the stuff…ideally we get the stupid thing fixed! However, my solution today was to just go home!! Once at home I went upstairs. My oldest daughter and son were on my bed. My daughter really isn’t doing well. She can barely open her mouth, can hardly eat, has cried herself to sleep some nights and has to wait until April 3rd for her dental surgery – if she/we can even pay for it!!🤷‍♀️ I don’t know if you can tell from this photo, but her one cheek is super swollen. The wisdom tooth is growing in sideways and is literally cutting up the inside of her cheek!! 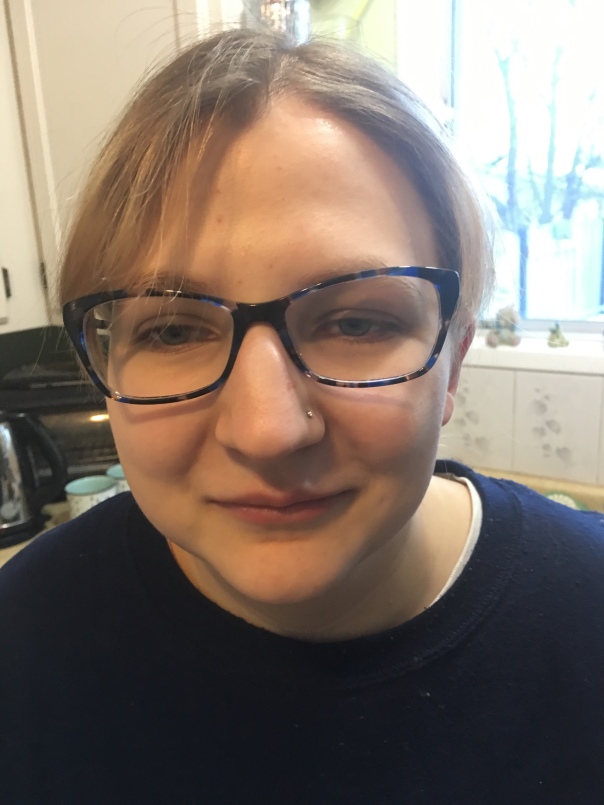 She is using Ora-gel (I don’t know if I spelled that correctly) constantly, numbing throat spray on the inside of her cheek and prescription strength naproxen, but it’s not touching the pain. I told her that we should call the dentist and tell them how bad the pain is and ask them if they can prescribe something stronger for it. She is barely able to eat anything at all. She tried eating her lunch at work and started crying and just stopped and didn’t eat. When I came upstairs she fell asleep in my bed. My son has a favourite necklace that he wears all the time. He has worn the cord thin and we’re afraid that it’s going to break. I’m pretty sure I wrote about it the other day. We sat on the bed together and took the beads off the old one and using the materials that we bought a couple days ago, we made him a new one that looks just like the old one. He is super happy about it!! Afterwards, my daughter woke up, because her stupid mouth was bugging her. We all went downstairs. I made grilled cheese sandwiches for supper. I made my daughter’s very lightly grilled so that it wasn’t very crunchy and she didn’t eat the crusts. She can only open her mouth about an inch without it hurting. Thank goodness they plan on giving her general anesthetic and not just local, because if they needed her to open her mouth wide, well that wouldn’t go over all that well…It was seeming greasy to me, so I had my usual boring eggs and plain toast. Mmmm good😂. It was actually a pretty late supper, especially mine. My hubby was tired and he went upstairs to bed before us. My son went on my phone for a while. I cleaned up the kitchen. Then I let out the dogs and filled water bottles. I got my son ready for bed and my daughter got dropped off from dance. I locked the doors, said goodnight to my daughter. Then I went on my phone. Now I’m going to get ready for bed.

“Hopefully one day I’ll get it right, or at least have fun, while about it I write!!”

Hey! Let me know what you think! Thanx❌😘❌‼️ Cancel reply